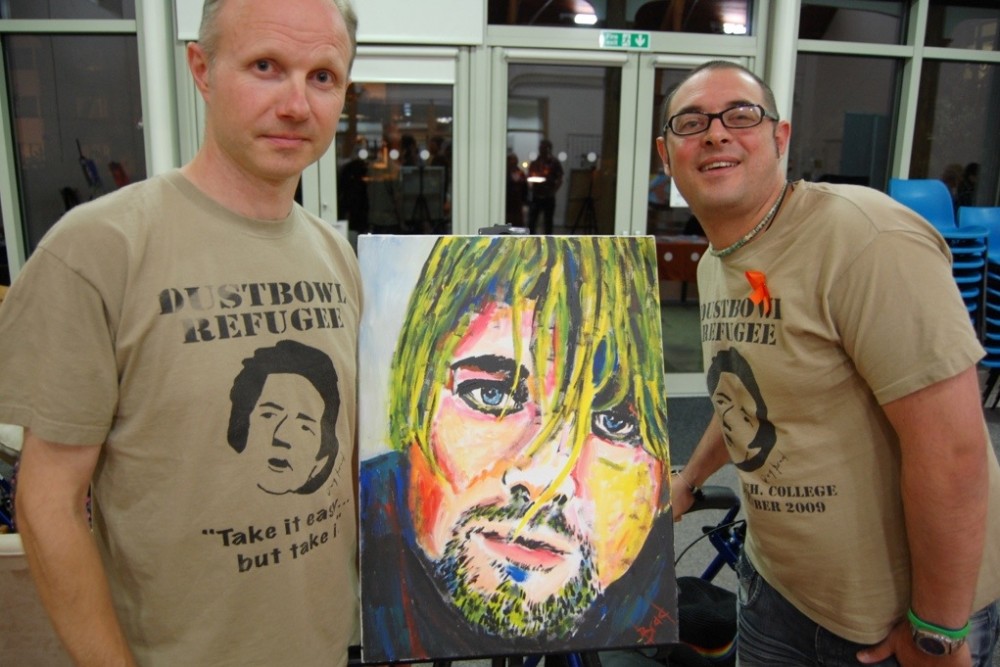 MORE than 70 people were taken on a journey of the painting life of talented local artist and multiple sclerosis sufferer Brad Harris at a one-off charity art exhibition held at Leigh Road Baptist Church, Marguerite Drive, Leigh-on-Sea on Saturday September 14.

With images of cult rockstar Kurt Cobain and characters from Star Wars standing on easels alongside abstract paintings of storms, mirrors and Brad’s own creation Guitar woman, those attending were treated to a spectacular and unique evening of art.

And an amazing 15 pictures were sold with 50 per cent of the proceedings – totalling £520 -going to the Multiple Sclerosis charity.

Brad, 39, has produced more than 100 paintings despite suffering from the crippling disease MS for the past 10 years. Using acrylic-based materials, his work ranges from portrait style pictures of famous people – copied from photographs – to abstract creations such as Guitar woman and still life.

Brad, commenting on the success of his exhibition which was attended by his local branch of the Multiple Sclerosis charity, said: “I never imagined so many people would turn up!

“And to sell so many pictures is amazing. I am so grateful to all my friends who have helped make this an event a reality.”

He added: “Art is such a big part of my life and I am eager to get back to having a go at painting again.

“Local artists who attended the exhibition have offered to help me and I can’t wait to get started!”

The dad-of-two, from London Road, Leigh, was diagnosed with MS after breaking his nose during a football game which led to him experiencing dizziness and double vision.

His work has featured in several Leigh Art Trails and has been on show at a number of high-profile local venues, including top hairdressers Strangeways in Leigh.

Brad met Strangeways co-founder Ade Phelan, who leapt to fame after styling David Beckham’s Mohican in 2002, when he used to get his own haircut at the former Stafford’s salon in Leigh. But despite bravely battling against the degenerative condition for several years, Brad was forced to pack up his easel and hang up the paintbrush in 2005 after he was unable to control the shaking in his right hand.

Brad, who attends a local Multiple Sclerosis group every Friday, added: “I am so lucky to have been able to do what I did for all those years. “I can always tell my children “this is what Daddy used to do” and be proud of what I have accomplished.
“Recently some local artists and pals suggested that I try using my left hand. And that’s what I am going to do!”

Event organiser Alan Cook, from Leigh-on-Sea, said: “The evening was a great success and was well-supported by many different parts of the community, including MS, Leigh Art Trail and Leigh Road Baptist Church. “We all got an interesting insight into how MS has affected Brad’s life.”